The International Fusion Materials Irradiation Facility (IFMIF) is one of the projects stemming from the Broader Approach Agreement, a partnership in fusion energy research between Europe and Japan. IFMIF is an accelerator-based neutron source that produces, using deuterium-lithium nuclear reactions, a large neutron flux similar to that expected at the first wall of a fusion reactor.
Two important milestones have recently been achieved at the Linear IFMIF Prototype Accelerator (LIPAc): the accomplishment of the first hydrogen plasma in the ionisation chamber and the first extraction of an ion beam (H+).
In the case of LIPAC, the Japanese Atomic Energy Agency (JAEA) has been responsible for the procurement of the conventional systems, such as the accelerator building, the secondary cooling system, and the machine and personnel protection system. Europe’s contribution, coordinated by Fusion for Energy (F4E), has been delivered by the European countries voluntarily contributing to the BA. The LIPAC injector has been developed and manufactured by France’s Commissariat à l’Énergie Atomique et aux Énergies Alternatives (CEA) Saclay. It has been successfully installed in Rokkasho, Japan,  and is now under commissioning.
The achievement of the first plasma and beam extraction has been an important achievement for the LIPAc team, including participating experts from France’s CEA, led by Raphael Gobin. After the accomplishment of the widely anticipated first plasma, extensively reported in Japanese media, within only two days, further commissioning allowed a proton beam of 100 keV and 100 mA to be obtained. The prospects are now excellent to reach the target of extracting a current of 140 mA of 100 keV D+ ions in the forthcoming commissioning phase with deuterium.

The status of the different components was presented. An important progress has been shown as well as important achievements reached:

During the meeting a dedicated session was devoted to the visit of the RFQ test bench set-up for the high power tests which have to be performed on last 3 module of the high flux Super module planned in the forthcoming weeks. During the visit we get the chance to see the clean room for the module assembly as well as the RFQ full size aluminum mock-up used to experiment the tuning of the cavity during the bead pull measurement.

Within the forthcoming months, it was clearly highlighted that the components needed for the 2nd phase of the commissioning will arrive like a “tsunami” at Rokkasho. A lot of integration activities will have to be performed within our tight schedule.

A key milestone related with the LIPAc Installation and Commissioning activities, that are going on in Rokkasho, took place on Tuesday 14 October. The project management from JAEA, F4E and PT went together to Hachimangu Shintoist Shrine in Noheji to pray for the success of LIPAc. Each of us made an offer to the Gods asking for their divine support to our project. Our actions were blessed with wind and rain from the strong typhoon that was passing over Japan those days. 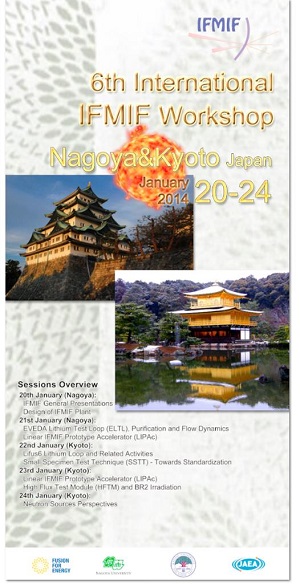 The New Year brought a very important event for the IFMIF agenda: the 6th International IFMIF Workshop, kindly hosted by the universities of Nagoya and Kyoto, from Monday 20 to Friday 24 January 2014, where the most recent advances and achieved milestones of our project were shared among the community. In particular, the recent achievement of the IFMIF IIEDR (Intermediate IFMIF Engineering Design Report) submitted on schedule on June 2013, stamping the end of the IFMIF Engineering Design Activities, was thoroughly covered during the first day. Also, the on-going activities on the different EVEDA prototyping subprojects were discussed, with special relevance to the latest advances of the LIPAc accelerator, which installation is about to start.
The time we all passed together reinforced the links and allowed lots of valuable parallel discussions to exchange ideas and to clarify points of view, which are essential for the important coming milestones that we will have to overcome in the next months. Our project is entering a decisive phase but the global enthusiasm shared these days in Nagoya and Kyoto reflect a strong will to face the difficulties ahead, and are a foretaste of the coming successes.

Link to the workshop agenda

Much technical information was exchanged by the various presenters, showing the status of the different components. After the previous LTM05, held in Legnaro (Italy), a lot of progress has been made, demonstrating the strong effort of the entire LIPAc community in Japan and Europe.

Important milestones were reached in the project and presented in detail during the meeting:

Key MEBT components are already integrated and the conditioning of the buncher is progressing well. The MEBT is expected to arrive in Rokkasho after summer 2015.

A site visit of the Accelerator Prototype Building was held, so all participants could see the installed injector. The injector was assembled by JAEA and their subcontractor, with the assistance of CEA experts, positively demonstrating the close collaboration between all parties.

See you next LTM07 in Rokkasho: