The setting-up of the 1.125 MW Linac in Rokkasho, for which the first accelerator sub-systems provided by the European Home Team has arrived in March 2013, requires a well-coordinated integration and commissioning programme, due to the distributed nature of the deliveries:

The LIPAc beam is generated by an injector using an Electron Cyclotron Resonance (ECR) deuteron (D+) source. After being properly focussed and filtered along the Low Energy Beam Transport (LEBT) unit, the D+ beam is accelerated by two successive systems: a normal-conducting RFQ and 8 superconducting Half-Wave Resonators (HWR) located within the SRF Linac. After control and measurement of the beam parameters, the D+ current is stopped by a Beam Dump (BD). Between these systems, specific Medium Energy Beam Transport (MEBT) and High Energy Beam Transport (HEBT) lines transport and match the beam properties to the downstream components. Amplifier chains, part of the RF Power System, based on tetrodes, provide the RF power required. A Cryoplant is needed to cool down and maintain the 4.5 K temperature in the SRF Linac. The beam instrumentation is distributed along the machine, in addition to the diagnostics included in each subsystem.

The building, completed in Rokkasho in March 2010, consists of an accelerator vault, a nuclear heating, ventilation and air conditioning (HVAC) area, a heat exchange and cooling water area for both radiation controlled and non-controlled areas, an access room, a control room, and a large hall for power racks, RF systems (HVPS and RF power chains) and the 4 K refrigerator. The accelerator vault is surrounded by 1.5 m thick concrete walls and ceiling.

3D view of the LIPAc facility

IFMIF accelerator will become the most powerful Linac in the world; however, its prototype, LIPAc, will on its own lead the world Linac beam power range 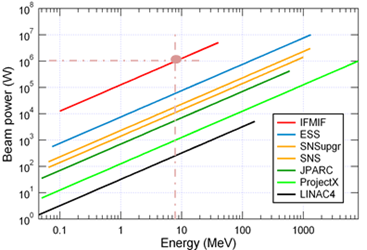