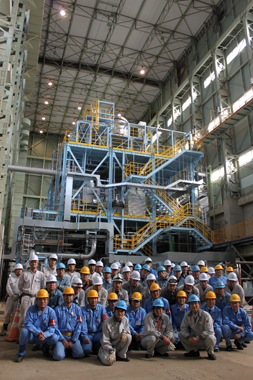 m test loop, physically similar to the loop in the IFMIF Plant, yet with a lithium target of reduced width, has been built in the Oarai Research and Development Centre of JAEA and was commissioned in late February 2011. A first “integral concept” target assembly manufactured in stainless steel has been used to start experimenting with the loop. A more ambitious target assembly in EUROFER/F82H, using a removable backplate that is under construction by ENEA (Italy) and is expected to be used in a second phase.

The EVEDA tasks related to the Li target facility validation consist of 4 activities which cover the construction and operation of a Li test loop including purification systems, diagnostics for the Li target, erosion/corrosion tests of loop structure materials and remote handling aspects of the target assembly. The activities are jointly carried out by JAEA and ENEA.

The EVEDA Lithium Test Loop (ELTL), physically almost equivalent to the loop in the IFMIF Plant, has been built at Oarai and successfully commissioned in February 2011 with an “integral concept” target assembly manufactured in stainless steel. The design was carried out from March to December 2009 and the construction was completed by November 2010. The loop consists of three floors with a total height of approximately 20 m from the ground level and a pit in which the dump tank is placed. The ELTL is composed of two major branches which are the main loop with 6”/8” piping and the purification control loop with a 1” piping. All piping is made of AISI 304 steel. The main loop contains the target assembly, a quench tank, an electro-magnetic pump (EMP), an electro-magnetic flow meter (EMF), a Li cooler and the dump tank. The tanks connect to Ar gas cylinders and turbo-molecular vacuum pump units to control pressure and vacuum.

The ELTL is able to generate a flow rate of 0.05m3 /s which will produce a flow velocity of 20 m/s in the target assembly. It can operate at Ar pressure and in a vacuum condition of 10-3 Pa.

The target assembly is installed at the 3rd floor inside of an air-tight vessel, which is filled with Ar during operation. The target assembly is equipped with a double reducer nozzle and a concavely curved open channel of 100 mm width (2.6 times reduced compared to IFMIF) to generate a free surface Li jet of nominal 25 mm thickness like in IFMIF.

A Li flow at IFMIF nominal velocity of 15 m/s was achieved in the target assembly with an Ar gas pressure of 0.12 MPa. In September 2012, the loop was back in operation after the damage suffered at the time of Great East Japan earthquake. During this restoration work, the first test operation was conducted to gain critical information about the geometrical stability of the lithium flow and the performance of the flow guiding structure up to 20 m/s flow speed.

The purification loop is connected to the main loop at the upstream and downstream of the EMP. An impurity monitoring loop is branched at the downstream of the impurity traps in the purification loop. The purification loop includes a cold trap that removes oxygen, and two mechanical interfaces to install two hot traps to remove nitrogen and hydrogen respectively. These two hot traps are designed and fabricated in collaboration with Japanese universities, who qualify the getters in a separate task. These traps will be installed in the future. The N content is considered particularly critical, since it has a strong impact on corrosion and erosion through the formation of Li ternary nitrides Li3CrN2. The trap must therefore reduce the N content to values < 10 ppm, but the methodology followed; i.e. a getter made of pellets of Fe doped with Ti, has currently still shown limitations with the observation of an unexpected saturation of the gettering capacity.

The impurity monitoring loop includes a Li sampler to analyze impurity concentration in the Li off-line, and interfaces to two on-line monitors, which will be installed in the future.

The dump tank is capable to store the 2500 kg of Li that were melted from 1608 ingots. The installation was particularly laborious in a purposed design glass-box to limit the contamination by air and humidity (values below 25 ppm was ensured).

The diagnostics for the free surface cross-flowing Li jet in the target assembly exposed to vacuum that will absorb the 10 MW beam power is of utmost relevance. The thickness and the waviness of the jet must be controlled to ensure sufficient Li screen to absorb the beam energy, which presents its peak for deuterons at 40 MeV at 19 mm. A contact probe has been developed with a minute needle that does not generate visible turbulences that drops voltage at contact with flowing Li. It has been successfully applied to measure jet thickness and wave heights at the Li loop of the University of Osaka. Its adaptation to the ELTL is still to be proven and to the high radiation environment of IFMIF is still to be done.

A new optical method by means of time-of-flight of a laser beam has been developed and tested by Osaka University with a precision of 1 µm. Applicability at the ELTL has been proven in preliminary tests.

A thorough analytical assessment of the wave height distribution combined with CFD modelling has managed to predict the pattern with Görtler vortices under Rayleigh-Taylor instabilities. Wave amplitudes are inversely proportional to liquid Li speed and with 90% of probability the nozzle will guarantee surface amplitudes within the 1 mm specified.

Dedicated corrosion/erosion tests for austenitic and RAFM steels were planned with the existing LIFUS3 loop at ENEA-Brasimone but certain limitations to accomplish the expected validation activities led to the construction of a new liquid Lithium test facility in 2010. The new loop LIFUS6 is built with a simplified configuration from the hydraulic point of view and contains a cold trap operated continuously in a bypass stream and a hot (nitrogen) trap based on Ti-sponge operated in batch. The Li will flow under isothermal conditions at 350°C. The maximum velocity in the test section will be about 16 m/s. The impurities will be measured on-line by a resistivity meter developed by ENEA and University of Nottingham; it relies on the linear variation of the metal resistivity at a given T with the concentration of N anions, and by the chemical analysis of Li samples. A resistivity meter will be sent to Oarai to be integrated in the ELTL.

The experimental program foresees up to 8000 hours of corrosion/erosion tests, which will start in spring 2013.

A dedicated orbital Laser welding machine has been developed by JAEA to remotely weld and cut a lipseal flange. The process has been validated using a mock-up of the IFMIF inlet pipe in collaboration with Osaka University. The flanges are made of AISI 316L steel and the peripheral lips are 2 + 2 mm thick. A 16 kW fibre laser is used. Welding and cutting is done with a power of 5 kW beam power and a speed is 3 m/min. Welding quality is acceptable, but cutting still needs to be improved to avoid sticking of the flanges and proper weld geometry for re-welding the same lips. In addition, quality procedures to be applied remotely need to be developed.

At ENEA, a target assembly mockup is under construction to simulate remote replacement of a removable backplate based on the bayonet concept and detachment and reconnection of flanges fastened with a dedicated connection system developed at the institute. The tests will simulate the geometrical constraints of the test cell using a manipulator system similar to that planned for IFMIF.