The ion source delivers a continuous deuteron beam (140 mA, 100 keV) with high availability and low emittance. It includes an ion source, based on an electron cyclotron resonance cavity, and a Low Energy Beam Transport line (LEBT) to transport and match the extracted beam to the RFQ entrance by means of a dual solenoid focussing scheme. In addition, an electrostatic chopper will be implemented between the two solenoids to enable the operation of LIPAc with short pulses of very sharp rise/fall times. 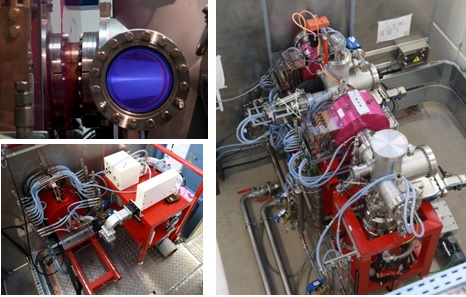 The injector was assembled at CEA-Saclay in order to test the components before the arrival in Japan, scheduled at the beginning of 2013. After the first H+ beam produced in May 2011, a test campaign was carried out in pulsed and continuous operation. Pulsed beams of 150 mA at 100 kV and continuous beams of 100 mA at 75 kV were routinely produced. The first D+ beam was extracted in April 2012, first in pulsed mode and then in continuous mode for a short period in order to limit the activation of the elements. However, as the continuous operation at 100 kV was limited by HV discharges in the extraction system, a new 5 electrode system (instead of the former 4 electrode system aiming to minimize the beam emittance) has been installed and injector tests started again at the end of September 2012 to complete the optimization (ion source plasma, space charge compensation, solenoid setting) and characterize the beam emittance targeting RMS emittance values lower than 0.25π mm·mrad.

After successful installation in its final destination, Rokkasho, it will follow commissioing before the beam characterisation phase.